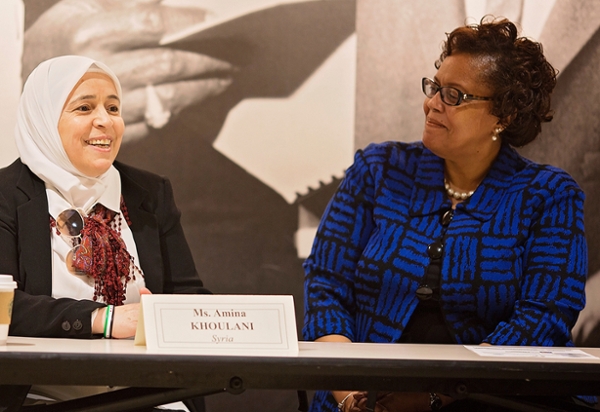 In conjunction with Global Ties Alabama, Cumberland School of Law’s Community Mediation Center hosted a recipient of the U.S. Secretary of State’s International Women of Courage (IWOC) award on March 10.

Amina Khoulani, a Syrian refugee now based in Manchester, U.K., is one of the 2020 IWOC honorees. She was recognized in Washington, D.C., by Secretary of State Mike Pompeo and First Lady Melania Trump at a ceremony on March 6 prior to visiting Alabama.

Established in 2007, this annual award recognizes women from around the world who have demonstrated exceptional courage, strength and leadership in acting to improve others’ lives. As part of the U.S. Department of State’s International Visitor Leadership Program, the awardees visit U.S. universities, businesses, and non-profit organizations to share strategies and ideas to empower women around the globe.

Khoulani is a survivor of Bashar Al-Assad’s detention and torture centers, which have arbitrarily detained more than 140,000 Syrians. Because she displayed “peaceful activism” and calls for greater civil rights in the country, she was arrested and imprisoned for six months in 2013; her husband was detained for two and a half years. They survived, but her three brothers died while in regime custody.

After being released, Khoulani and her family fled Syria in 2014. It was then that she began dedicating her life to helping families of forcibly disappeared Syrians. She is a founding member of “Families for Freedom,” a women-led movement launched in 2017 by families whose loved ones have been detained and disappeared in Syria.

Forced from her home and country, living under constant threat as a refugee without government representation, she continues to advocate for human rights, democracy, and peace in Syria through her organization and by sharing her story with groups across the globe.

During her stop in Birmingham, assistant dean and director of Cumberland’s Community Mediation Center, Cassandra Adams, gathered a group of ladies to hear her story at the Birmingham Civil Rights Institute.

Two female law students presented a brief summary of the struggles of civil rights activist Reverend Fred Shuttlesworth prior to hearing her testimony.

Khoulani introduced herself and began by saying how honored and happy she was to be in Birmingham, especially now that she is a human rights activist herself.

After listening to her heart wrenching story of trial, triumph and perseverance told with the help of her English translator, the women in attendance praised her for her efforts and all stood to offer messages of prayer and encouragement for Khoulani and her family.

Khoulani then requested that the individuals in the group share her story as well as send their written words of encouragement to her by email so that she may share with her family.

To close, Adams presented her with a special plaque of recognition while saying, “The soil where we are right now has been filled with tears from the past and we add the tears that we shed with you today, not with sadness, but with strength, for from this day all of us in your presence can support you and the human rights efforts throughout the world.”

Following the event, Khoulani received a tour of the Birmingham Civil Rights Institute before continuing her travel throughout Alabama.